Q 1. Why did the king want to know answers to three questions?

Ans. The king wanted to know the answers to three question as he wished to become a great ruler.

Q 2. Messengers were sent throughout the kingdom

iii. to look for the wise hermit.

Ans. ii. To find answers to the questions. 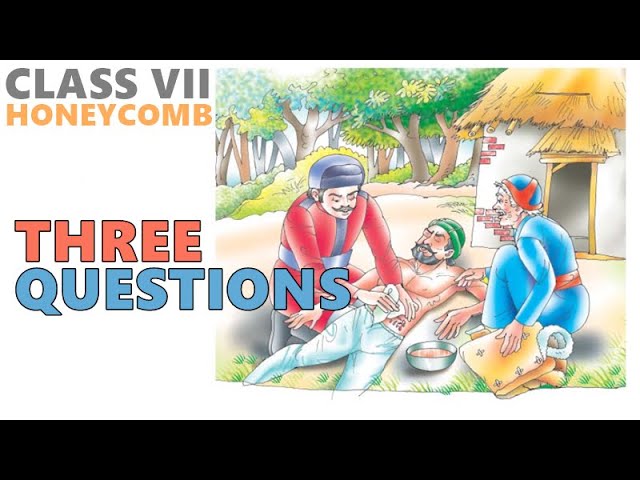 Working with the text

Q 1. Why was the king advised to go to magicians?

Ans. Some of the wise men thought that to decide the right time to do something, one must look into the future and only magicians were able to do that. So, they advised the king to go to the magicians.

Q 2. In answer to the second question, whose advice did the people say would be important to the king?

Q 3. What suggestions were made in answer to the third question?

Ans. No, none of the wise men won the reward. That is because all of them came up with different answers and the king was not satisfied with any of those answers.

Q 5. How did the king and the hermit help the wounded man?

Ans. First of all, the king cleaned the wound by washing it. Then he covered the wound with his handkerchief. He continued to dress the wound until the bleeding stopped entirely. The king gave some water to the wounded man to drink.

The king and the hermit carried the wounded man inside the hut and let him take rest in the hut in the night.

(ii) Why did he ask for the king’s forgiveness?

Ans. (i) The bearded man was the king’s enemy. He had come there to take revenge from the king of his brother’s death and take back his property.

(ii) He asked for the king’s forgiveness because he came to kill the king and the king saved his life.

Q 7. The king forgave the bearded man. What did he do to show his forgiveness?

Ans. The king forgave the bearded man. He showed his forgiveness by offering to send doctor and servants to take care of the wounded man. He also promised to return his property too.

Q 8. What were the hermit’s answers to the three questions? Write each answer separately. Which answer do you like most, and why?

Ans. The hermit’s answers to the three questions were:

Use any three of the above words in sentences of your own. You may change the form of the word.

Q 2. Each of the following sentences has two blanks. Fill in the blanks with appropriate forms of the word giver in brackets.

Q 1. Imagine you are the king. Narrate the incident of your meeting the hermit. Begin like this:

The wise men answered my questions, but I was not satisfied with their answers. One day I decided to go and meet the hermit…

Ans. The wise men answered my questions, but I was not satisfied with their answers. One day I decided to go and meet the hermit who was renowned for his wisdom. I went to him and saw him digging the earth. I asked him if he could answer the three questions I sought answers to. But he continued to dig the earth and did not respond at all. I felt that he was getting tired so I offered to help him in digging. He handed over the spade to me. I kept digging for a while. Then I repeated my questions and asked if he would answer them. Even then, there was no response from his side. Then he pointed towards a wounded man approaching us.

Q 2. Imagine you are the hermit. Write briefly the incident of your meeting the king. Begin like this:

One day I was digging in my garden. A man in ordinary clothes came to see me. I knew he was the king…

Ans. One day I was digging in my garden. A man in ordinary clothes came to see me. I knew he was the king but remained calm. He told me that he sought answers to three questions and wanted me to answer those. I politely greeted him and then continued to dig the earth. I was continuously digging and felt tired. Seeing this, the king offered me help. I accepted and handed over the spade to him. He began to dig and after some time, he again asked me the same three questions. I still chose not to respond and offered him help if he was tired. He refused and continued to dig.

After some time, I saw a wounded man approaching us.