1. Two circles of radii 5 cm and 3 cm intersect at two points and the distance between their centres is 4 cm. Find the length of the common chord.

Now, suppose RS = x. The diagram for the same is shown below. 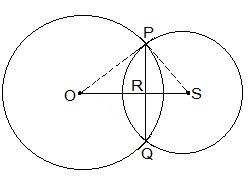 Now, put the value of x in equation (i)

2. If two equal chords of a circle intersect within the circle, prove that the segments of one chord are equal to corresponding segments of the other chord.

Let AB and CD be two equal cords (i.e. AB = CD). In the above question, it is given that AB and CD intersect at a point, say, E.

Step 1: From the center of the circle, draw a perpendicular to AB i.e. OM ⊥ AB

Now, the diagram is as follows- From the diagram, it is seen that OM bisects AB and so, OM ⊥ AB

Similarly, ON bisects CD and so, ON ⊥ CD

Now, triangles ΔOME and ΔONE are similar by RHS congruency since

OME = ONE (They are perpendiculars)

OM = ON (AB and CD are equal and so, they are equidistant from the centre)

Now from equations (ii) and (iii) we get,

3. If two equal chords of a circle intersect within the circle, prove that the line joining the point of intersection to the centre makes equal angles with the chords.

From the question we know the following:

(i) AB and CD are 2 chords which are intersecting at point E.

(ii) PQ is the diameter of the circle.

Now, we will have to prove that BEQ = CEQ

For this, the following construction has to be done:

Draw two perpendiculars are drawn as OM ⊥ AB and ON ⊥ D. Now, join OE. The constructed diagram will look as follows: 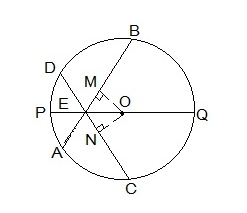 (iii) OME = ONE [These are the perpendiculars]

The given image is as follows: 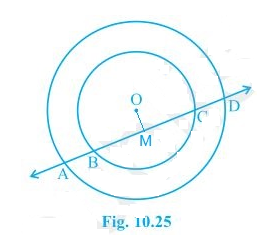 First, draw a line segment from O to AD such that OM ⊥ AD.

So, now OM is bisecting AD since OM ⊥ AD.

Also, since OM ⊥ BC, OM bisects BC. 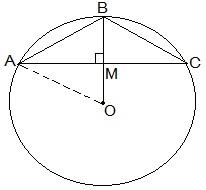 Let the positions of Reshma, Salma and Mandip be represented as A, B and C respectively.

Since AB = BC, ABC can be considered as an isosceles triangle. M is mid-point of AC. BM is the perpendicular bisector of AC and thus it passes through the centre of the circle.

By applying Pythagorean theorem in ΔOAM we get,

Now, solving this equation we get the value of x as

Substituting the value of x in equation (i), we get

Solving it we get the value of y as

So, the distance between Reshma and Mandip is 9.6 m.

6. A circular park of radius 20m is situated in a colony. Three boys Ankur, Syed and David are sitting at equal distance on its boundary each having a toy telephone in his hands to talk each other. Find the length of the string of each phone.

First, draw a diagram according to the given statements. The diagram will look as follows. Here the positions of Ankur, Syed and David are represented as A, B and C respectively. Since they are sitting at equal distances, the triangle ABC will form an equilateral triangle.

AD ⊥ BC is drawn. Now, AD is median of ΔABC and it passes through the centre O.

Also, O is the centroid of the ΔABC. OA is the radius of the triangle.