Q1. Show that in a right angled triangle the hypotenuse is the longest side.

ABC is a right angled at A.

BC > AC and BC > AB [ Because the side opposite to the greater angle is longer.]

BC is the longest side.

The hypotenuse is the largest side in an right angled triangle. 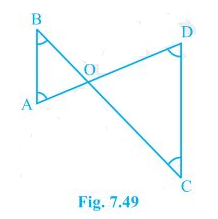 In the question, it is mentioned that angles B and angle C is smaller than angles A and D, respectively i.e. B < A and C < D.

Since the side opposite to the smaller angle is always smaller

In ΔABD, we see that

So, ADB < ABD — (i) (Since angle opposite to longer side is always larger)

Hence, it can be concluded that 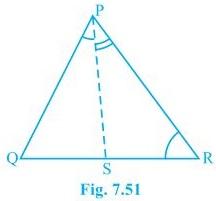 It is given that PR > PQ and PS bisects QPR

Now we will have to prove that angle PSR is smaller than PSQ i.e. PSR > PSQ

First, let “l” be a line segment and “B” be a point lying on it. A line AB perpendicular to l is now drawn. Also, let C be any other point on l. The diagram will be as follows: 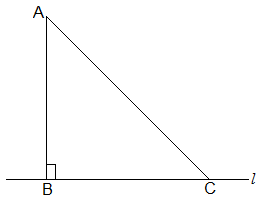 Now, we know that

Hence, C must be an acute angle which implies C < B

So, AB < AC (As the side opposite to the larger angle is always larger)